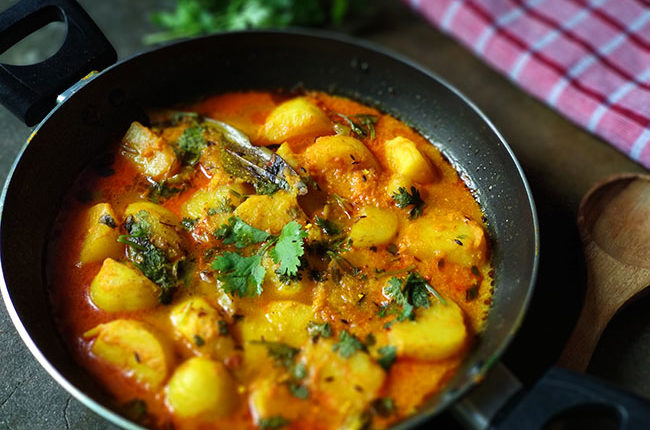 Bored with normal Aloo sabzi? Try out the Dum Aloo recipe given below and let me know the outcome.

Dum Aloo Recipe is a delicious potato-based dish authentically from the Kashmiri cuisine. It is also known as “Aloor Dum” in Bengal.

The dish is widely popular throughout India. Though the regional variations in taste and spices show up different flavors in this recipe.

Like in Bengal, we prepare Dum Aloo using regular spices. For a richer edition, cream or curd are also added sometimes. The restaurant version of the same dish comes up with a lot of spices and cream to get a nice smooth and creamy texture.

I have shared a recipe that you can prepare easily at home without compromising the taste. 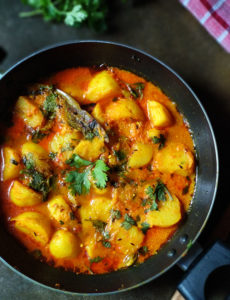 Generally, Dum Aloo or Aloo Dum is cooked from baby potatoes. But if those are not available with you, regular potatoes can also be used. Make sure to cut and keep the potato size moderate to large. If you are using a large potato, cut it into four equal cubes.

I have used here regular potatoes that are available in the market throughout the year. The potatoes are cooked in a not too thick gravy. But if you want, you can adjust the gravy texture to remain thick as per your choice. Here, tomatoes, dry spice powder, ginger paste, and curd are used in this recipe.

You can also add cashew nuts either in powdered form or a paste of the same. For that, grind the cashews in a grinder to make a slightly coarse powder. Or if you want to add it as a paste, use a little water while grinding. You will get a nice and smooth cashew nut paste.

Even you can use groundnut or peanut paste also in the Dum Aloo recipe. Some may prefer to use freshly grated coconut in this recipe. The coconut or peanuts will add a good texture to the gravy.

The curd or yogurt used in this recipe will give a slightly sour taste in addition to the other spices used. Overall, it will turn out to be an amazing sweet and spicy dish. 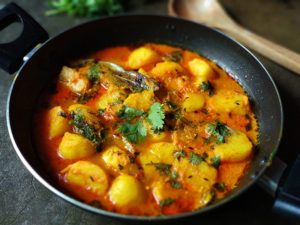 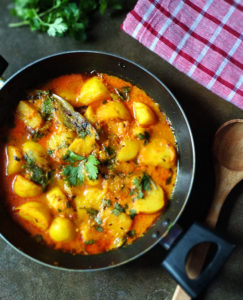 You can serve this potato-based dish to your guests and even include in your weekend meals. Children will also love the dish as they are really fond of potatoes. So why not give it a try!

I have cooked this recipe so many times and believe me each time it turns out awesome. Everybody in my family loves this dish.

Dum Aloo is generally served alongside Luchi (also known as pooris) at my place. Being from a Bengali family, this combination is a must and it tastes heavenly. Another deadly combination can be Bengali Mishti Pulao and Dum Aloo.

However, the other accompaniments could be Parathas, Fried Rice, or normal steamed rice and even Rotis or Phulkas. 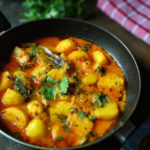 How to prepare Dum Aloo - Step by Step Recipe