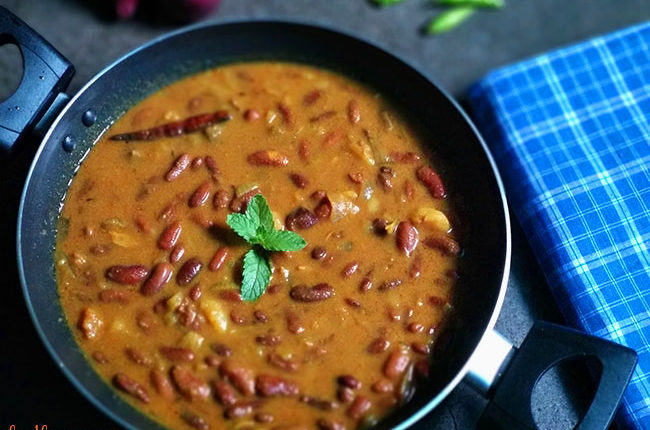 Rajma ki Sabji or Rajma Curry is a very popular vegetarian dish in North India. It is a staple curry recipe cooked from rajma in a thick gravy along with the Indian spices.

This curry is mostly served with long-grained Basmati rice or Jeera rice. The deadly combination of Rajma Curry and steamed rice is one of the most sought-after dishes in northern Indian households. Also known as, “Rajma Chawal“.

Rajma Curry or Rajma Masala (whatever you call it) is always in the favorite items list for almost all of my friends or colleagues who belong from Punjab or adjoining areas.

Being raised in a Bengali family, I never felt rajma to be a north Indian recipe. My mother used to cook rajma very often and I have always loved this curry. In fact, the recipe which I have shared here actually belongs to my mother. 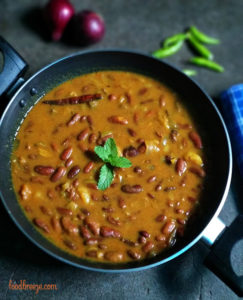 How to make Rajma Curry?

Though the rajma recipe seems a bit tough or complicated to some. But if you ask me it is not true.

This is an easy yet tasty recipe that does not demand any fancy ingredients. All the requirements can be fulfilled in no time since those are readily available in the Indian markets.

Rajma or Kidney beans, as we call them in English is the primary element to make this recipe. It is cooked in a thick to medium gravy with a few Indian spices.

You can always adjust the consistency of the gravy as per your taste. I personally like the gravy on a bit thicker side.

Depending on that, you can reduce the water while cooking. Even, you can add fresh cream or yogurt to give it a nice creamy texture.

You can use either chopped onions and tomatoes or make a paste out of it.

Generally, the dish is a bit spicy which enhances the taste of the curry. But you can always increase or decrease the number of spices such as green chilies or red chili powder as per your taste.

All of these spices when combined together with rajma not only taste good but also it is an extremely healthy dish.

Rajma recipe is an easy recipe that is nutritious at the same time. There are a lot of nutritional values associated with this dish.

Since the shape of rajma is very much similar to the kidneys present in our body, it is also called as kidney beans. In fact, these beans are rich in fiber and iron and considered good for our kidneys.

The kidney beans or rajma is an excellent source of plant-based protein. They are also rich in various minerals, vitamins, antioxidants, fibers, and other unique plant compounds.

Consisting of high magnesium, it helps in lowering cholesterol. Rajma is also good for diabetic people. In addition, rajma is a good source of potassium which dilates blood vessels and lowers blood pressure.

It is also good for our skin and believed to cure acne. 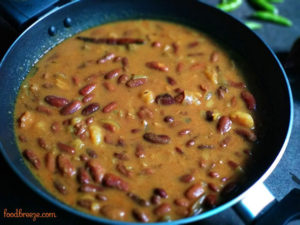 Besides, this is low in calories and hence aids in weight loss. For this reason, one should include rajma in their regular diet along with other beans and legumes.

Thus, rajma can be considered as a nutritious dish for sure. Now let us see some quick tips that might be helpful to you while preparing the recipe.

A few tips and tricks to make Rajma Curry: 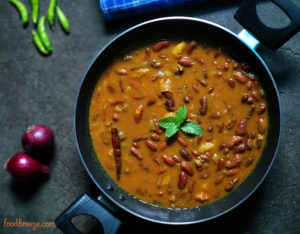 Mostly, people love Rajma Curry hot with steamed rice or Jeera rice. However, the other accompaniments could be simple Phulkas or Roti, Paratha, Naan, or POORI.

Without much delay, let us start with the recipe. 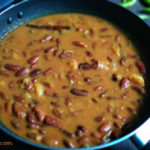