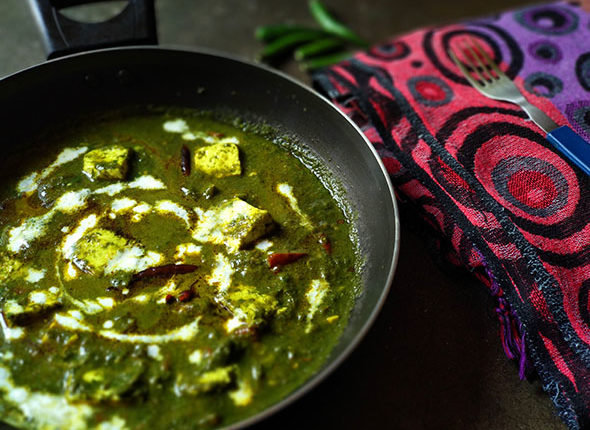 Palak Paneer Recipe is one of the delicious Indian Paneer recipes. Palak is basically ‘Spinach’ and Paneer means ‘Indian Cottage Cheese’. So this dish is a simple and quick combination of spinach and paneer.

In India though there are a lot of paneer recipes prevalent. Among which, ‘Kadhai Paneer’, ‘Shahi Paneer’, ‘Matar Paneer’ are worth to mention.

Well, Palak Paneer is the most common and all-time favorite at my home.

The key ingredient of the Palak Paneer recipe is the Palak or Spinach. The cubed paneer pieces are dipped and cooked in a thick creamy spinach sauce. Alongside the added Indian spices increase the taste and flavor of the dish.

This green recipe can be prepared in several ways. I do not claim my recipe as the authentic one. But yet this is another variation which I follow generally. 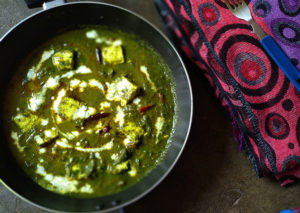 Spinach or Palak leaves are loaded with healthy nutrients. It is a good source of many vitamins and minerals such as Vitamin A, Vitamin B, Vitamin C, Magnesium, etc. Being a high content of Iron, spinach when mixed with Paneer, it becomes a boon in respect of the healthy benefits.

Paneer is a good source of protein and boosts weight loss. It also aids in the digestion process and keeps our heart healthy.

Thus, Palak Paneer is an amazing healthy yet yummy recipe which can be enjoyed by people of all age group. It is one of the best dishes to feed children who are not very fond of eating leafy greens. Since the green leafy veggie is blended to a smooth paste, it will become easy in convincing children to eat this. 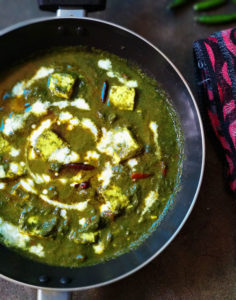 Variations in the method of processing the Spinach or Palak:

The most common method of processing green spinach leaves is said as ‘Blanching‘. It is a method used to preserve the green color of the palak leaves intact. In the process of Blanching, the spinach leaves are first cooked in boiling water for a minute or two. Then it is immediately transferred to ice-cold water to lower down the temperature. After that, we use to grind the leaves to make a smooth paste.

In a different variation, many of the people stir fry the Palak leaves (after rinsing it well in water) for a couple of minutes in a pan using mustard oil. Then they blend it in the grinder.

In my recipe, I have followed the Blanching technique since I find it healthy and easy.

Can we use homemade paneer in this recipe?

Obviously, we can use homemade paneer in this recipe. Homemade paneer or cheese is comparatively softer than the store-bought ones. That is why people tend to prepare paneer at home and then use the same in Palak Paneer.

However, you can also use store-bought paneer to prepare the recipe. This will lessen the preparation time as well as make the recipe a bit easier.

To beginners, I would suggest going for any kind of paneer which is easily available in the market.

Although the traditional Palak Paneer recipe goes with butter and cream. You can always replace those high fats with other healthier options.

Like, I have replaced the butter with desi ghee (clarified butter called Ghee in India). Even you can use mustard oil or simple vegetable oil.

Heavy cream is used to make the gravy a thicker one. Though, you can do the same without compromising on taste using Coconut milk, or cashew nut paste.

Even you can use the Malai which is accumulated while boiling milk. 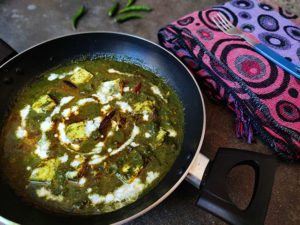 Some quick tips to prepare the Palak Paneer Recipe: 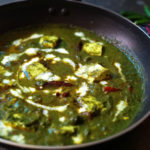 How to prepare Palak Paneer - Step by Step Recipe

Blanching and Blending the leafy greens: